My automatic answer would be: NO. Why? because of the simple reason that wealth is expressed in what’s physical and ephemeral, whereas spirituality concerns itself with the intangible and eternal (like a memory, a proverb, or values passed on from generation to generation).

Yet upon deeper pondering, it occurred to me that it might be just the way we choose to understand the question. Let me explain: in what way are we inquiring about the compatibility of spiritual interest with the burden of accumulating wealth?

As a mother, I see both matters as compatible. Accumulating material things would help me raise my family (cat included!) more comfortably. This would give them a feeling of safety, and being loved, as they are well-provided for. And with our basic needs covered, we could “worry” about the next-level needs such as esteem and self-actualization, both of which are strongly connected with spiritual growth.

This is only me, of course: a career-woman living in a developed country, lucky enough to have a livelihood and a strong social network of support.

What about the woman who’s the exact opposite of me? a younger, single female, living in a poorer country, with no job and no one to rely on? would she have a stronger or equal faith than/as what I have? would she be more spiritually mature than I am? is she holding on to spirituality as her means of consolation, or is she really maximizing her full potential in spiritual development because she’s not distracted with “worldly” and “material” concerns? 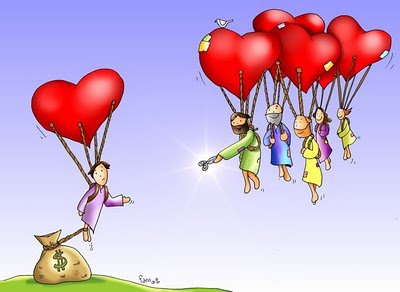 As a citizen, my stance only became more confounded the day I read the Dalai Lama utter the following statement:

The economic system of Marxism is founded on moral principles, while capitalism is concerned only with gain and profitability. Marxism is concerned with the distribution of wealth on an equal basis … as well as the fate of those who are underprivileged and in need, and [it] cares about the victims of minority-imposed exploitation. For those reasons, the system appeals to me, and it seems fair. (“Of course the Dalai Lama’s a Marxist”, The Guardian)

… because wealth distribution is only feasible after there has been prior accumulation! (Karl Marx actually predicted that capitalism would evolve in a more socialist/communist system and the material wealth that has been accumulated would make a fairer redistribution possible.)

Therefore, to be able to apply the moral principles the Dalai Lama spoke of, it is necessary (but not limited) to have “something” with which to materialize those concepts. For instance, buddhist households must have enough rice to give alms to the monks, if they want to express compassion. And how would they have “enough” rice to share if they hadn’t previously saved and accumulated it? Although this is not the only way compassion can be practiced, it is one very important aspect to consider.

Inspired from the same above-mentioned article about the Dalai Lama, I started to form my final conclusion. It also noted that:

[…] relief of suffering can only come from the realisation that pleasing ourselves doesn’t bring happiness – instead we must try to work skilfully and compassionately with others, as part of interwoven systems of connectivity that bind us together.

I believe that the accord between material abundance and spirituality boils down to the INTENTION of accumulating wealth in the first place.

Individuals who aim to earn a lot of money to fulfill their roles as breadwinners are not only executing their obligation, but they are also practicing generosity, compassion and patience towards others. This undoubtedly cultivates the spirit.

Households who save and invest their money to guarantee a good future for the younger members are exercising generosity and sacrifice, to say the least. This sets an example for other family members and therefore expands the cause of spirituality.

A society that allows the public use and enjoyment of environmental wealth (forest and seas, for example), who redistributes existing richness to the less-privileged are implementing social and economic justice to its citizens. This makes indiviual spirituality flourish, may it be through the soothing effects of being surrounded by nature, or the satisfaction of being assured of one’s survival.

My final answer then is a YES. Accumulating wealth is compatible with spirituality provided that the intention for doing so leads to practicing moral principles and advancing the cause of spirituality.