Gino’s experience differs a lot from that of Edward, not only because of the generational gap but because of the way the former decided to approach his debt dilemma. The fact that he has not had time to save enough money to be considered “financially stable” is a great factor in his decision to pay his debts with another loan. Now normally, people are advised against this because as you might already guess, it does pose a risk of entering into a debt cycle from where it could then be very hard to exit. It takes discipline, focus and great will power to not fall into a credit trap. Most importantly, Gino did not only take another loan to pay his initial debt- he also made it a point to earn additional money from various sources of income. But I don’t want to get ahead of myself. Dear reader, learn and enjoy!

Karessa asked me why I volunteered to be a guest blogger in Colorfulifesite Blog. The truth is I’m really eager to inform people about how I somehow recovered (slowly) and survived from my personal financial crisis. I would also like to share my experience, in case it could give them options on how to solve their debts.

Several years ago, my friends and I set up a corporation. It was the first business venture of my life. Needless to say, I was new to the corporate world and had not even the fundamental knowledge of things. I just took the opportunity. It was a “strike while the iron is hot” kind of thing. I was excited and impulsive at the same time that I didn’t even bother to educate myself, believing that I could learn along the way. Likewise, I joined the business world without any “financial muscle” because supposedly my contribution would be my skills. (Actually, the majority of the founders didn’t have money to invest. All we had were our Information Technology or IT skills.) This was why we needed an investor to sustain the various costs of this venture: marketing expenses, logistics, employees, and so forth.

One of the founding members met a potential financier who we all thought was an angel investor. After me and my friends agreed on his participation, he gave us a big amount of money as seed funds. We divided the financial responsibility and assigned each one an amount to be paid to the angel investor when the time came. All along, we believed that we would pay him back upon the success of the company’s project. After the papers were signed, the corporation became a legitimate one.

Unfortunately, things eventually started to go downhill due to the company’s internal issues. These issues imploded up to a point where I had to personally borrow money from loan sharks just so I could pay our employees’ salaries. I was confident I could pay the loan sharks, but little did I know that a deeper financial trouble was about to blow up in our faces:

What we thought was an angel investment was actually not. It turns out we signed a document stating that he was loaning money to the corporation, not investing! Furthermore, the terms stated that the loan should be paid within a year.

To top this all off, I have acquired credit card bills as well as other personal debts to settle. 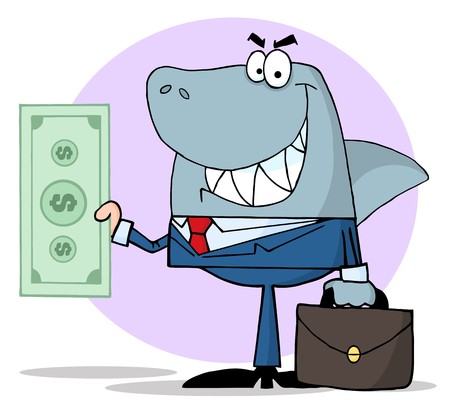 Thankfully, the debt to the “investor” was cleared by the person who invited him to the corporation. Still, I found myself looking at an important financial dent.

I had to start getting rid of the accumulated debt I still have. So what I did was that I sold everything I could and pawned some of my belongings. That gave me some “starting money” to do something about my debts.

Likewise, I returned to my parents’ house to save on rent and started recycling some things, like my old computer. Most importantly, I got help from my family in getting a loan to pay the loan sharks. My mom helped me get loan from cooperatives (Credit Unions) that give a lesser interest rate and a longer period payment plan. Loan sharks’ conditions of payment were tougher than a bank’s, so it was of my great interest to get them off my case as soon as possible. That’s the bad thing about getting a loan that doesn’t require any type of verification such as tax declaration, employment record, etc… Anyway I paid a big part of my debt through those cooperatives.

A credit union is a member-owned financial co-operative. These institutions are created and operated by their members and profits are shared amongst the owners.

… (They) represent an alternative to banks and possible solutions to common complaints about traditional banking institutions… (It is) a savings and loan entity formed by a group of people who share some common characteristics, such as a profession or geographic location. The members of the group pool their money to provide loans and demand deposit accounts to other members. Credit unions are not-for-profit entities that are owned and founded by their members; they function as democracies, with each member having a say in how the credit union is run.

As a matter of fact, we borrowed from 3 credit unions. On 2 of them, my mom was the account holder while the other one is under my younger brother’s name. I did this because they were the only ones who were qualified to apply for a loan.

Part of the money I used to pay the cooperatives was earned through online jobs. I had to work double shifts and with multiple employers. All of these, without counting other jobs, so all in all that required me to work for 10-16 hours a day. I went on getting local contracted jobs too, like designing small business solutions for small enterprises. The pay was small but at least I got something, rather than nothing. (It also helped me build more contacts.)

As I mentioned before, I got some money came from pawning and selling my belongings. Some proceeds from the sold stuff were used to get along with my everyday life. I’m not even talking about spending for leisure; I meant something more commonplace like buying food and paying for fare. This money also allowed me to pay some of my other personal, smaller debts.

Then my father said he will pay some of my debt from one of my mom’s cooperative account and I can pay him whenever I could, without interest. I was relieved!

After that, I got a chance to enroll in an MBA course to educate myself on how to properly run a business. While I was in school I kept on accepting online work and working for local clients mostly to pay my school tuition, my dad, my mom and my brother. To this day I’m still not 100% clear of my debt but it’s more manageable compared to what had happened to me few years back.

Colorfulifesite’s Note: Gino has long since learned his lesson regarding the need to be financially literate and equipped before entering a business venture. He is currently a Managing Partner at a couple of startups focused on helping small enterprises get the best adapted business solutions.